How Many Baseballs Are Used In A MLB Game & Season? (Solved!)

Are you an MLB fan?

How long have you been following the baseball league?

Whether you’re new in this fandom or have old connections to it, there are some things all MLB fans are curious about.

One of those questions is, “How many baseballs are used in a MLB season?”

Since many people ask the same question, I decided to create an entire blog post about it!

Plus, I will answer some other relevant queries you might have. Sounds interesting, doesn’t it?

How Many Baseballs Are Used In A Single MLB Game?

By calculation, it means that 30 teams use about 1,550 balls in a single day.

According to an equipment manager at MLB, the most amount of balls used in one game is about 120 baseballs.

The manager said that this number results from balls used between scuffs, fouls, home runs, and those lost to the stands.

In addition, the number of balls used can usually increase when the game involves extra innings.

How Many Baseballs Are Used In A MLB Season?

Each of the thirty teams plays a total of 162 games. Hence, every season has about 2430 games.

And, that’s not counting playoffs, world series, or spring training.

Also, remember that the number can go up and down in different games and seasons.

The number depends on how the players played, how many balls were tossed out of the ground, and how many innings the game had.

However, this is usually the average number of balls used in every MLB season.

If you are wondering how many balls Rawlings manufactures in total, the number exceeds 2.4 million every year and 4,000 dozen baseballs every week.

The company gets its leather from Tennessee Tanning, a well-known tannery operation. Tennessee gets its cowhides from Pennsylvania, Cargills Beef Plant.

What Is The Average Lifespan Of One MLB Baseball?

Now, the answer to this question is different depending on who you ask.

For example, manufacturers and other people claim that every Major League baseball lasts about seven pitches on average.

However, when you ask the on-fielders, players, and equipment managers at MLB, they claim it lasts much less: around two to three pitches.

So, I guess it is safe to say that:

Yes, I know; the material, manufacturing facility, and other details are pretty much the same in every ball.

However, haven’t you noticed that some Lays packets have more or fewer chips than the others?

Also, remember that not all baseballs have the same life span.

Some may have hidden manufacturing faults that make them collapse sooner than expected, others last particularly longer than usual baseballs because they are either built strongly or used leniently.

Hence, it will be a good idea not to expect the same lifespan from every single MLB baseball out there.

What Type Of Baseballs Are Used In MLB? 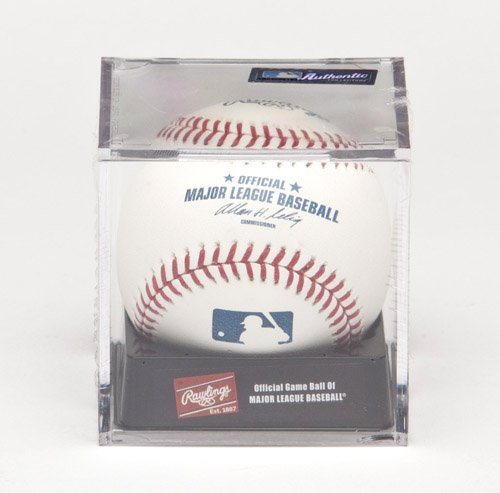 The answer is pretty simple!

Regardless of which league the player belongs to, the official ball of MLB is always by Rawlings.

Yes, it is the same company that produces Costa Rica’s infamous stitched ball and is popular for its baseball equipment and accessories.

For more than 40 years, Rawlings has efficiently been the exclusive supplier to Major Leagues Baseball.

Therefore, both Minor and Major Leagues use official baseballs by the same company. However, they are slightly different in design.

The balls used by the Major Leagues are a bit better in terms of leather quality and have much smaller seams compared to the ones used by minor leagues.

In contrast, the Minor Leagues play with a ball with seams a bit larger. Also, players report that these balls do not carry well when they hit them.

However, the balls used by the minor league have a higher tolerance, and their core specifications are slightly different.

The interesting part is that although the manufacturing company is the same, Rawlings, the two balls are created in different facilities.

The traditional balls used by the Minor League are created in China, while the Major League baseballs are made in a Costa Rica factory owned and operated by Rawlings.

And that’s what has been going on all this time. However, this tradition changed in 2019.

In 2018, MLB requested to make some changes. And as a result, minor league baseball players switched to a new ball.

Moreover, it would have Minor League Baseball’s logo.

What Does MLB Do With Used Baseballs?

Remember that whenever a mlb ball is hit out of play, or has become discolored, it get changed.

So what happens to it?

Most balls that are in good condition are saved and reused during practice.

Some of these MLB balls used in particularly popular games or by infamous celebrities are also auctioned later.

I have personally witnessed many people buying such used MLB baseball for a considerable amount of money!

While many may think it’s a bizarre thing to invest in, many fans and enthusiasts like to spend on such baseball collectibles.

Balls that are used in practice sessions, or auctioned and sold, are sent to the museum or Hall Of Fame.

Yes, the MLB team has a Hall of Fame/museum where particularly important baseballs are sent to be showcased.

These balls are stored, labeled, and held there for all visitors and baseball enthusiasts to watch.

Not to forget that many of the balls tossed out of the ground are never retrieved from the crowd.

So, you can say that some of the used baseballs also go to the fans and audiences around!

How Much Is a MLB Baseball Worth?

When they look at how many baseballs are used in an MLB season, people have a common question: how much would it cost?

And considering that every ball is made by Rawlings and stitched with high-quality leather, you would think the budget is sky high!

The cost of every MLB baseball is somewhat around $7, and every year, about 1 million of these balls are sold.

So, when you take the shipping cost and charges into account, the League would have to spend around 10 million dollars.

And that’s just on baseballs!

I am not even talking about all the other expenses that the league has to take care of.

So, the next time you think someone catching an MLB baseball is no big deal, think again.

While it may not be that costly itself, it is a part of a million-dollar investment!

MLB has one of the biggest fan following worldwide. Hundreds and thousands of people buy MLB merchandise and apparel, and even more, are obsessed with watching the games.

So, it is completely understandable that many people have interesting, deep questions about the organization and how it works.

Questions like how many baseballs are used in an MLB season, what kind of balls are used, and what they do with the used ones.

These are only some of the many curiosities people have. And if you think your questions are bizarre, nosey, and weird, don’t feel awkward about it.

Besides, it is only a part of being a true fan!