How Does a Baseball Radar Gun Work and How To Use It?

Ever since they’ve first appeared at the ballparks in the 70s, radar guns have been an invaluable part of baseball.

They’re an essential instrument in the toolkit of every coach and provide helpful insight into athletes’ performance.

Besides, they often have a great influence on coach decisions and adjustments during the game.

They also help us as spectators know the game better and improve the viewing experience.

Understanding how does a baseball radar gun work is key to getting the most accurate info possible and properly using that information.

How Does a Baseball Radar Gun Work?

Radar technology is, of course, nothing new. For almost a century, it’s been used to detect ships, aircraft, and similar objects.

While its main purpose – to track an object’s motion and determine its speed hasn’t changed, the development of technology has allowed its use in many other fields.

Among others, the sports.

Radars used in baseball were specifically designed to cater to sport’s needs while cutting out all unnecessary features of traditional motion and speed detecting instruments.

Without going too deep into technicalities, baseball gun radar is a device that works both as a radio transmitter and receiver.

Radio transmitter sends a radio signal at a predefined frequency.

The receiver’s role is to analyze that signal (or radio waves) when it bounces off a certain object.

In the case of baseball radar guns, that object is, naturally, the ball.

When the ball is moving in the direction of the gun or away from it, the frequency of the returned waves will differ from those transmitted.

This change of frequency is caused by a phenomenon known as the Doppler Effect.

The distance covered by the radio waves can be shorter on the return trip than on the way towards the object.

This means that the ball is flying towards the gun and the wavelength is shorter. And vice-versa.

The wavelength is longer when the return trip is longer, meaning that the ball is moving away from the radar.

The baseball radar gun measures how much the wavelength changes. Based on that, it can calculate the speed of the ball.

How to Use a Radar Gun for Baseball? 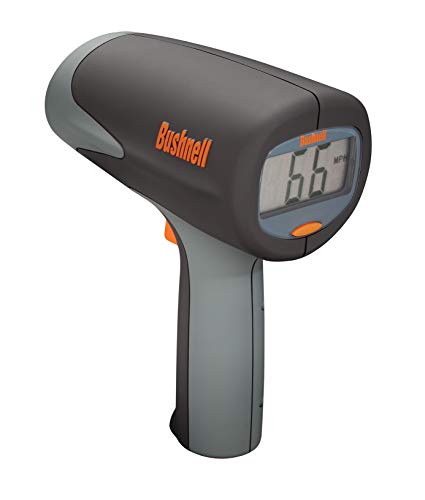 To collect the best and the most accurate data, you need to know how does a baseball radar gun work.

No matter how advanced or expensive the model is, improperly used radar may provide misleading information.

Proper radar positioning is crucial in getting precise results. The maximum range varies from model to model, but most radars have a limit of around 150 feet.

Standing close to the pitcher doesn’t necessarily mean you’ll get better results. In any case, you should always keep at least 25-30 feet distance between the radar and the ball.

Make sure to check the manual to learn the optimal distance for a certain model.

Another important factor is the angle at which you’re recording the ball movement. The radar gun emits the signal in a narrow beam.

This means that you’ll get the best accuracy by positioning the gun directly in front or behind the pitcher.

If you’re holding a radar gun in front of the player, it’s always a good idea to have a net or some other safety barrier between the two of you.

It goes without saying that a radar gun  should have a clear point of view towards the moving ball.

Most of the modern radar guns have a continuous mode. This eliminates the need to hold the trigger all the time and pull it every time the ball is thrown.

In continuous mode, the gun will automatically detect the movement of the ball and detect its speed.

Additionally, it will monitor the ball and track the speed from the moment the pitcher throws it until it reaches its destination.

Of course, the use of radar guns in baseball is not limited only to pitchers.

You can track the batter’s swing speed or measure pace to the first base and throws by infielders, outfielders, and catchers.

For best results, test multiple pitches or hits as no players can perform with perfect consistency all the time.

This way you can learn the average speed of pitch or a hit by a certain player. Also, you’ll get a better idea of what works in terms of positioning, grip, or body stance.

How Accurate are Baseball Radar Guns?

Different models  of radar guns provide different levels of accuracy when it comes to detecting ball speed and trajectory.

Depending on the levels of baseball you’re involved with, you may get satisfactory results even using the lower-end radar gun models.

The more advanced and expensive radar guns, like those used in the MLB, can even provide accuracy within a 0.5 mph margin of error.

While they can’t be used by police as they’re not government-certified, baseball radar guns can be useful for detecting the speed of a vehicle.

Some of the advanced models have an auto racing mode, developed specifically for these purposes.

However, to get a relatively precise reading on the car’s speed, the radar gun would need to be stationary and positioned directly at the moving vehicle.

People not directly involved with baseball are usually unaware of how big a role radar guns play within the game, especially on the practice field.

Whenever you see your favorite hurler throwing insane fastballs, know that radar guns played a big role in developing his pitch.

They are particularly important for players who are coming back from an injury or working in the offseason.

The baseball radar gun allows them to gradually increase their throwing intensity and manage the workload more easily.

It’s also useful for determining issues with a pitch or even discovering a potential injury.

With all technological advancements, modern baseball radar guns are fairly simple to use once you learn the main principles of how they operate.

At the same time, the simplicity of use doesn’t take anything away from their accuracy and the value of the information they provide.