Is Pine Tar Illegal in Baseball? (Rules For Batters & Pitchers)

However, most of us have likely first heard of pine tar through baseball.

For years, players have used it to improve their grip, often against the rules of the game.

The use of pine tar has frequently been a source of controversy in baseball, eventually forcing MLB to directly and in detail address it in its rule book.

Still, even today, many fans don’t know the proper answer to the question is the pine tar illegal in baseball.

Is Pine Tar Illegal in Baseball?

The question is pine tar is illegal in baseball depends on who’s using it.

Right now, batters are allowed to use the pine tar to some extent, while it’s forbidden for pitchers.

In the MLB, batters can use the pine tar to improve their grip on the bat. However, there are some restrictions.

Rule 3.02(c) of the Official Baseball Rules states, to paraphrase it, that the bat handle can be covered with grip-improving substance for no more than 18 inches from its end.

If the bat is found to have such substance, pine tar for example, beyond those 18 inches, that bat will be removed from the game.

The rule further explains that, if the substance goes beyond 18 inches, the umpire will order the hitter to use a different bat.

If the excess pine tar is removed, the bat may be used later in the game.

There’s logical reasoning behind this rule. If there’s pine tar on the barrel, then the bat will make the contact with the ball for a tiny bit longer.

This results in an extra spin on the ball, which provides an unfair advantage for the batter.

When the well-hit ball has some extra backspin, it will travel further and rise higher. Also, more topspin on line drives will cause them to fall to the ground.

Pitchers’ use of pine tar and similar substances is regulated by Rule 3.01 (3.02) of the Official Baseball Rules.

It unequivocally states that no player is allowed to intentionally discolor or damage the baseball by rubbing it with any foreign substance.

The pine tar doctoring is also regulated by Rule 8.02(b).

Here, the league says that the pitcher is forbidden from attaching anything to either hand, wrist, or fingers.

The Latest Rule Change Regarding the Use of Pine Tar

Before the start of the 2021 season, the MLB decided to introduce even stricter rules regarding the use of foreign substances such as pine tar by pitchers.

As the illegal use of grip enhancers spreads around the league, the MLB will ramp up its enforcement of the current rules.

In the memo sent to all teams in June 2021, the league announced that any players caught using the illegal substance against the rules will be immediately ejected from the game.

The team won’t be allowed to replace the player on the roster. In addition, the said player will receive a 10-day suspension.

The use of pine tar has stirred some controversy in the league over the years.

Perhaps the most famous incident happened on July 24, 1983, during the game between the Royals and the Yankees.

The Yankees were one run up in the ninth inning when George Brett of the Royals hit a go-ahead two-run home run.

Billy Martin, Yankees manager at the time, demanded that the umpire inspect Brett’s bat for the excessive use of pine tar.

And, indeed, the umpire ruled that the bat was illegal with pine tar exceeding the 18-inches limit.

As a result, the home run no longer counted and Brett was the final out of the game.

However, after the Royals’ protest, the call was overturned, and the home run was restored.

The game eventually resumed 25 days later in the top of the ninth inning with the Royals leading 5-4.

This incident resulted in the rule change ensuring that challenges must be voiced prior to a play occurring.

Benefits of Pine Tar for Batter and Pitcher in Baseball 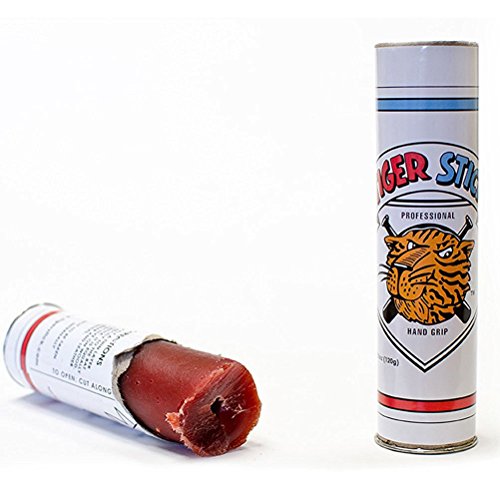 To feel comfortable when handling lightning-fast pitches, a batter needs to have a solid and firm grip on the bat.

Modern bats, made of aluminum or composite ones, usually feature special grips at the end of the bat.

However, that’s not the case with wooden bats used in the MLB, so the hitters have to find another way to improve the grip.

Most of them achieve this by applying pine tar to their bats.

The solid grip provided by pine tar makes the bat easier to handle, and gives batters more confidence on the plate.

In addition, it adds to the safety of everyone on the baseball field.

Sometimes, after a swing and a miss, the bat can slip out of the hitter’s hands putting everyone around him at risk.

This is particularly important on hot summer days when everyone is sweaty and the bat can easily fly out of hands.

Although they’re not allowed to use it, some pitchers still illegally apply pine tar to the balls before throwing.

Balls doctored in this way provide pitchers more control and allows them to put extra spin on the ball.

As the MLB changed the constitution of the official balls, the use of pine tar and similar substances has become even more popular among pitchers.

New balls are slicker and have lower seams making them more difficult to control and some pitchers are happy to use any advantage they can find.

Doctoring of the balls even has some supporters among the batters.

They feel that when the pitcher has better control of the ball, it also makes their own job easier.

This way they can get a better idea of where the ball is going.

Most players agree that pine tar is definitely useful when it comes to producing optimal performance.

The legality of its use has changed over the years and we’ll likely see some more changes in the future.

At the moment, the batters are the only ones that are allowed to make use of the sticky stuff.

However, there have been some talks about MLB introducing a universal sticky substance that would help pitchers with their grip.

There’s a fine line between the grip and the performance enhancement.

The league will have to dance on that line to help players give their best while maintaining a level playing field for everyone.