Can You Use A First Baseman Glove In The Outfield? (Baseball And Softball)

Everyone who’s ever played baseball or softball knows how critical good gloves are for success in the game.

However, while comfort and good fit are important, you can’t just pick up any glove that feels right.

Before finding one that it fits, you’ll need to check that it’s suitable for your position on the baseball or softball field.

Certain types of gloves provide a competitive advantage for certain positions. Also, it’s often prohibited by the rules of the game.

Sometimes, the differences between different types of gloves are rather obvious.

Gloves worn by players on the first base are bigger in comparison to the ones used by other infield players and much closer in size to those used in the outfield.

This leads many to wonder can you use a first baseman glove in the outfield.

Below, I’ll answer if this is possible and what exactly makes 1B gloves different from others.

Can You Use A First Baseman Glove In The Outfield In Baseball?

The first baseman gloves differ from those used by outfield players in design, shape, and size and it’s more similar to a catcher’s mitt.

These gloves are designed to help first basemen play better. Consequently, 1B gloves would hinder the performance of outfield players.

Even when we put aside the functionality issues, the baseball rules state that wearing first baseman gloves is illegal for outfielders.

Rule 1.13 of the official baseball rulebook defines the size, shape, and construction of the 1B mitt.

Furthermore, rule 1.14, which defines the fielder’s glove, states that “each fielder, other than the 1st baseman or catcher, may use or wear a leather glove” and then proceeds to explain what the fielder’s glove should look like.

This also means that if the first baseman is not positioned at the first base, the umpire will instruct them to replace the 1B mitt with a fielder’s glove.

Can You Use A First Baseman Glove In The Outfield In Softball?

Softball rules on the use of first baseman gloves by outfield players are not that much different than in baseball.

Rule 3.4 of the official softball rulebook establishes the difference between gloves and mitts, with the latter designated as those used only by first basemen and catchers.

The main difference between gloves and mitts is, of course, that gloves, unlike mitts, have separated fingers.

The rule further states that “any player may wear a glove, but only the catcher and first baseman may use mitts”. However, the rules allow the catcher to use 1B mitts.

Also, similar to baseball, there’s a performance element to this.

Regardless of the rules, an outfielder using a 1st baseman mitt would be giving up the competitive advantage provided by the gloves intended for their position.

Why Are 1st Base Gloves Different? 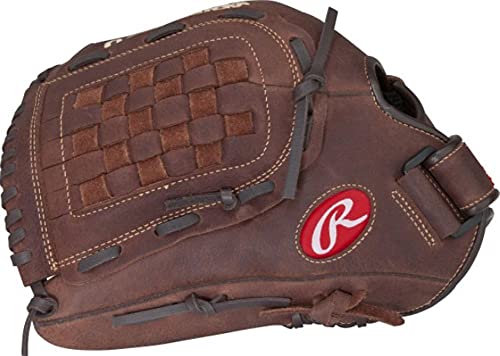 The job of a 1st baseman is fairly different from the job of an outfielder. Other than catcher, no other position handles so many throws.

As most of these throws are at a high velocity, the extra padding on the glove protects the hand from taking too much beating.

In addition, a big part of 1st baseman’s job is fielding ground balls and receiving throws from other players.

Longer gloves and joined fingers allow them to scoop the ball from the dirt easily while the larger glove surface helps with catching the ball.

Furthermore, these mitts are deeper than the regular gloves, so it’s easier to control the ball after the catch.

First basemen are not so concerned with throwing the ball they catch, so the extraction from the deeper pocket is not an issue.

To better understand the benefits of first baseman’s gloves, here’s how they differ from regular gloves.

The first baseman gloves are longer and wider than other gloves used in the game. Commonly, they’re between 12 and 13 inches long.

Measured from the base of the thumb crotch to the opposite end’s outer side, their width is generally around 8 inches.

As I already mentioned, having gloves this big is very helpful as it provides a larger target for other infielders to throw the ball to.

Still, the mitt shouldn’t be too large as it may hinder the control during the play, especially with younger players.

Similar in shape to a catcher’s mitt, the 1st baseman’s glove has a continuous round edge and conjoined fingers which are probably the most recognizable detail.

This type of structure helps with scooping the balls from the ground and catching them.

The edge and joined fingers practically act as a tunnel, guiding the ball to the webbing.

In most cases, gloves for the first baseman will have extra layers of padding to better protect hands from hard throws and wild balls.

Gloves used by first basemen are the deepest of all gloves used on the baseball or softball field.

The reason for this is to give players full control over the incoming throws and reduce the possibility of a ball popping out of the glove.

If the web is too shallow, the ball may squirt out of the top of the glove as the player makes the quick upward motion while picking it up.

It allows players to dig out the ball from the ground without picking up a lot of dirt in the process.

Deeper pockets may make locating the ball when transferring it for a throw harder, but that is not that relevant for first basemen.

First basemen have unique assignments during the game, rather different from other infielders, and especially outfielders.

The peculiar nature of their job means that they need specific equipment to do it properly.

This is why they have different gloves from everyone else on the field and are the only ones allowed to use that type of gloves.

Larger, deeper, and conjoined fingers, first baseman gloves, or mitts, are the key to their successful performance.

Besides practicality, the use of 1st baseman gloves is also determined by the rules of the game.

Any other player wearing these gloves is a reason for the umpire’s intervention.