Are Knee Savers Bad For Catchers?

It’s well-known that catcher is one of the most important and demanding positions in baseball.

However, not a lot of people know that catcher is also among the positions that take the greatest toll on the player’s body.

The range of physical activity a catcher engages in and characteristic stance while waiting on a pitch put a lot of strain on both the upper and lower body.

Catcher’s knees are particularly under an enormous amount of stress and knee injuries, including tendonitis, muscle strains, and meniscus tears, are, unfortunately, fairly common.

Still, there are ways to reduce the risks of these injuries, and one of the most popular, but also most controversial, is wearing knee savers.

There has been plenty of debate in the baseball community around the question are knee savers bad for catchers.

So I’ll dig deeper into the matter to see how much of it is justified.

What are Knee Savers?

Before we move on to analyzing whether knee savers are beneficial for catchers or not, I should fit explain what knee savers actually are.

Knee savers are a relatively new invention in the baseball protective gear industry.

They were designed by a Maine doctor, Dr. Douglas Farrago, who claimed the patent in 1991 and later sold the rights to Easton.

The invention itself is rather simple. Knee savers are special pads or cushioned blocks, commonly filled with foam and attached to the straps on the back of shin guards.

They work to allow the cushion and prevent catchers from fully squatting down on their knees.

This way, they create a greater handle between the thighs and knees which results in less stress and more support for knee ligaments, tendons, muscles, and cartilage.

The purpose of all this is to reduce knee stretch and tear and thus decrease injury risk.

Are Knee Savers Bad For Catchers?

Since they were introduced as a part of protective baseball equipment, knee savers have constantly been a subject of discussion on what are their actual benefits.

Both sides have some seemingly valid arguments, so the answer to the question “are knee savers bad for catchers” is not that simple.

The matter gets even more complicated by the fact that currently there’s no substantial research to back either side on this issue.

Most of the studies done on the issue researched the impact of knee savers on coal miners, a profession that also includes a lot of squatting as a part of regular work.

The conclusion on the benefits of knee savers for baseball or softball catchers is mostly drawn from this type of research.

To get a clearer picture of whether knee savers are detrimental or useful for catchers, let’s take a closer look at both sides of the argument.

What Do the Opponents of Knee Savers Say?

Those critics of knee savers claim that wearing them is not only useless as a means of preventing knee injuries, but can actually increase the risks.

According to them, the knee saver, especially if worn improperly, can create a wedge between the tibia and femur which increases the already significant amount of stress that the catcher’s knee joints have to endure.

In addition, they make a point that knee savers were initially only intended for older players recovering from injuries to reduce strain on the injured knee.

Those who oppose knee savers claim that, when young players wear them, they can hinder their ability to develop and strengthen their legs which is essential for any successful catcher.

Plus, the games in youth leagues and the load young players have is generally light and not particularly challenging so there’s no real reason for them to wear knee savers.

What are the Benefits of Knee Savers?

A lot of criticism directed toward knee savers often has no basis in reality and is rarely backed up by real evidence other than the general stance that ball players should man up and handle the game without any additional aid.

Similar to pitching being hard on the elbows and shoulders, playing catcher can be terrible for the knees and every bit of help is usually welcomed.

Even if you haven’t suffered any previous injury, wearing knee savers will ease the load on your knees and prevent issues down the road.

Especially since knee problems are often hereditary and some players may be more susceptible to them without even knowing it.

It should also be noted that, unlike some other positions, catchers commonly play the whole game and are often of a heavier build.

So, having something to relieve a bit of pressure on the knees helps endurance, particularly during long innings.

Another common criticism of knee savers is they make players lazy and help them develop bad habits.

Supposedly they encourage a lazy set behind the plate as players use them to rest and get comfortable.

Plus, according to critics, knee savers can increase the reaction time and, generally, hinder the catcher’s performance.

However, as with other helpful equipment, it’s not the knee savers that make the players lazy but their character.

If they’re inclined towards lazy behavior, they will be lazy on the field, wearing knee savers or not.

Knee savers are there to provide support, not rest, and being lazy is only the result of bad habits and poor work ethic.

Knee savers don’t slow down catchers in any way, especially if they use proper footwork.

Even when wearing knee savers, the catcher can still have decent reaction time when making a pop to throw or drop down to block a ball. 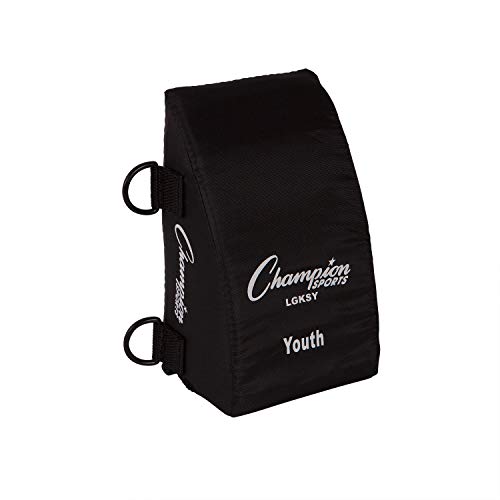 Another common misconception is that no professional players use knee savers.

While, of course, there are a lot of pro catchers who don’t use knee savers, there are also many who wear them to every game and consider them to be an essential part of their equipment.

According to some studies, 47% of the total number of starting catchers in the MLB wear knee savers.

Further research shows that most of them are seasoned veterans and players with at least several years of Major League baseball behind them.

Plus, a fair share of this number is the catchers who had previous knee issues.

Still, the fact that almost half of the pro players use knee savers tells us that they can’t be bad for catchers.

If MLB clubs, with all their resources and expert medical staff, allow their catchers to wear knee savers, then there are certainly some significant benefits.

How to Fit Knee Savers?

For knee savers to fulfill their role and be useful, they must fit properly and be correctly attached to the shin guards.

However, doing this is relatively simple and can be done in a few easy steps.

First, you put on the shin guards as you normally would with the buckle on the inside.

Then, assume the crouching stance and place the knee savers on the back of your calf muscles with the corner facing the inside of the knee.

The two hooks on the outside of the knee saver should be connected to the corresponding circle hooks on the shin guard.

Also, don’t forget to do the same for the inside knee saver and shin guard hooks.

While crouching, adjust the knee saver so they are below the knee, on your calf muscles, and beneath the thighs.

In addition, make sure that the knee savers are not too tight or too loose.

What is the Reason for Catchers’ Knee Issues?

The squatting stance that the catcher spends a lot of time in is rather difficult to hold, especially during long games played on hot summer days.

Most of us would hardly be able to pull off that stance for more than two minutes.

While in this position, no body part takes more load and experiences more stress than the knees.

So, when you’re in that position for more than an hour a couple of days a week, (not counting practices) the strain on the knees piles up and puts pressure on joints, muscles, and tendons.

Therefore, it’s easy to understand why a lot of players resort to using knee savers to ease up at least some of the stress on their knees.

Knee savers are not mandatory parts of baseball equipment and no player has to wear them unless they want to.

However, as they commonly stay in play for the whole game, often during a double-header, catchers can certainly use some help and extra support for their knees.

Particularly if they have previously dealt with knee injuries. In those cases, it’s almost impossible to continue a career without knee savers.

Of course, knee savers are just a small piece of knee injury prevention in baseball and they won’t make injuries magically disappear.

Therefore, it’s important to, if possible, limit the number of innings and games a single catcher is involved in.

Also, proper conditioning exercises are crucial for reducing the level of stress on all body parts and especially the knees.

Be aware that knee savers are helpful, but only to a certain level.